THIS month South Indian superstar Samantha Akkineni turns a year older and will be celebrating her 33rd birthday on April 28.

The multi-award-winning actress has risen through the ranks in the past decade to become a formidable force in Indian cinema and delivered an impressive body of work. She also does philanthropic work and is married into a famous film family.

The A-list star, not surprisingly, has a huge fan base and they will all wish her well as she turns a year older. To mark Samantha turning 33, Eastern Eye decided to present 33 fun facts about her.

1. The commerce graduate started working as a model before successfully auditioning for her first film and starting an extraordinary journey in cinema.

2. Samantha is married to popular actor Naga Chaitanya, who is the son of legendary movie star Akkineni Nagarjuna. She had starred opposite him in her debut film Ye Maaya Chesave in 2010. The Telugu film earned her a Filmfare Award in Best Debut Actress category.

3. Although her second film as a lead, Baana Kaathadi (2010), was her first in Tamil cinema, it was actually the third in that language she had signed, but it came out before the other two.

4. Tamil romantic drama Moscowin Kavery (2010) was her third film as a lead, but it was actually the first movie that she had ever signed.

5. She starred opposite Mahesh Babu in 2011 action comedy Dookudu, which became the highest grossing Telugu film at the time. It was described by the Los Angeles Times as “The biggest hit you’ve never heard of.”

6. In 2012, the popular star suffered a prolonged period of illness, which forced her to take an extended break. The ordeal inspired her to set up a charity supporting women and children.

7. Her film Eega (2012) was shot simultaneously in Tamil and Telugu. Both versions were so successful that the film was later dubbed in Hindi, Chinese and Swahili. It was the first Telugu film widely released in Africa.

9. At the Filmfare Awards (South) in 2012, she won the Best Actress awards for Tamil and Telugu for her performances in Neethane En Ponvasantham and Eega, respectively. Samantha became the second ever actress to achieve the feat after Revathi had secured both awards in 1992.

10. Her 2013 comedy drama Attarintiki Daredi opposite Pawan Kalyan became the highest grossing Telugu language film of all time when it released.

11. Samantha was diagnosed with diabetes at a young age and later played the role of a diabetic patient in 2013 film Satyamurthy.

12. One mantra she took on board and it helped her was to, not take yourself too seriously and with that regard, she likes people with a good sense of humour.

13. A remake of a 2016 Kannada film of the same name, Samantha’s 2018 thriller U Turn was a film that was shot simultaneously in Tamil and Telugu.

15. Her 2016 Telugu language film A Aa was loosely based on the novel Meena, which was previously adapted as a 1973 movie. She won a number of honours, including Filmfare South Best Actress award.

16. 2017 film Mersal became one of the highest grossing Tamil films in history.

17. Her hit 2018 Tamil film Irumbu Thirai ran for 100 days, and a dubbed Telugu version titled Abhimanyudu was released. A Hindi dubbed version titled The Return of Abhimanyu was also released.

18. Her 2019 hit film Oh Baby is a remake of 2014 South Korean film Miss Granny. A Bollywood and Hollywood remake of the same film are being planned.

19. Her hit 2020 release Jaanu is a Telugu remake of 2018 Tamil film ’96, but Samantha had initially rejected it thinking she wouldn’t be able to do it.

20. Although she made a quick cameo in 2012 film Ekk Deewana Tha, the actress has no intention of making the move to Bollywood despite getting multiple offers over the years and is happy acting in South Indian cinema. 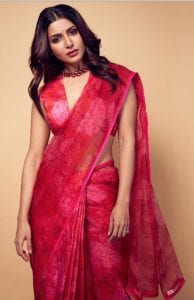 21. Samantha will woo Hindi-speaking audiences in the second season of web serial The Family Man and plays a negative character in it.

22. The actress says she is inspired by late great Hollywood legend Audrey Hepburn.

23. Whenever possible she avoids shooting after 6pm, so she can be home with her husband and have family time.

24. She has starred with all the superstars of South Indian cinema, including doing two or more films with Vijay, Suriya, Dhanush, Jr NTR and Mahesh Babu.

25. The actress is known as Sam, but is also addressed by the name of Yashoda by friends and family.

26. Samantha has a number of tattoos, which includes her husband’s name and one on the wrist of two arrows, which is a Roman symbol meaning ‘create your own reality’.

27. She loves to read and a favourite book is Rhonda Byrne’s bestseller The Secret.

28. London is her most favourite holiday destination.

29. A TV series that was a firm favourite for the actress was The West Wing.

30. She has always been praised for her fashion choices and is most comfortable wearing traditional Indian outfits.

31. Samantha once confessed to having a fear of snakes.

32. She and her husband are a power couple, and have the pet name ChaySam.

33. Samantha only believes in competing with herself and regularly praises fellow stars when they do good performances.

Six appeal
Six super performances of Samantha Akkineni:
Neethaane En Ponvasantham (2012): The Tamil language romantic drama saw her play one half of a couple at different stages of their lives. She played the same role equally well in Telugu romance Yeto Vellipoyindhi Manasu opposite a different leading man.

Eega (2012): One of the most unique films made in India saw Samantha deliver an award-winning performance of a heartbroken woman who teams up with a lost love reincarnated as a housefly, to take revenge on the man who murdered him.

A Aa (2016): The actress won further accolades for her performance in a film that was both a relatable romance and family drama.

Super Deluxe (2019): The multi-layered Tamil drama sees the actress deliver a stand-out performance in an ensemble cast as a cheating wife stuck with a dead body. 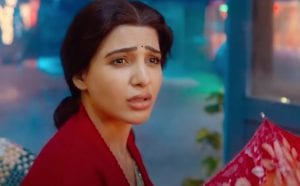 Jaanu (2020): The Telugu romance is one of the best movies of 2020 and sees Samantha play a woman reunited with a former flame after many years.

Donate part of salary to low-income staff: Vettori to Bangladesh board

EXCLUSIVE: ‘We owe the inquiry to BAME victims,’ says Hancock

Asian Times compelling news content and trusted multi-platform network attracts a loyal readership. This offers advertisers an exceptional opportunity to connect with audiences who are otherwise difficult to reach.